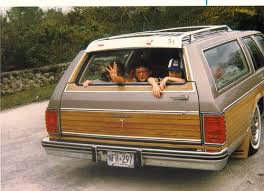 The air-conditioning is on the fritz in the church van.

The Pacific House monthly meal team reported it yesterday, and Shawn, who is preparing to take a group of our young people on a mission trip to Washington, D.C. this coming Sunday, rightly sounded the alarm.

“We will definitely need this for D.C. in July,” he wrote in an email.

I wasn’t so sure.

When my friends began getting their licenses, and began inheriting a fleet of decrepit Oldsmobiles, Mercury Cougars, and paneled station wagons from their grandparents, we were more focused on the sweetness of our freedom, pure and simple.

The fact that the plastic seats gave us all second-degree burns…or that you had to bring a Coke with you on any long trip because, you know…no air conditioning…or that the radio had no knobs and was only AM to begin with…well, that hardly mattered.

We were free.  Masters of our fate. Kings of the road.

Yet actually, I am fairly confident that we were not.

Yes, our cars were crummier.  But then I think about where we were going in those cars.  Driving the mean streets of Madison, Connecticut to go see “Ghostbusters” or to score free food from our friends who were working at McDonald’s wasn’t exactly bearing the cross, even if it was in somebody’s grandmother’s old station wagon.

The fact is, we were remarkably blessed, and utterly sheltered, and we lived out our summers happily, with little expectation that we’d have a view larger than Labor Day.

Our parents weren’t worried about our values, and they knew that life would end up teaching us plenty, and soon enough.

That some of us already had lives far harder, and in some cases, more desperate than they appeared did not occur to anyone.

That our values were more precarious than our parents’ great love for and faith in us allowed for did not occur to anyone, either.

That’s why I feel so strongly about Shawn’s summer mission trips to DC, and all the ways in which we are inviting our young people to develop that larger view now, rather than vaguely waiting for “life to teach them” how complicated and heartbreaking the world can be.

I find that they have a much clearer sense of vulnerability than most of us ever did, both in the worlds they know and the ones they don’t.

I love how many of them are inclined to push back against the kind of easy world that I, for one, was all too happy to dwell in when I was their age.

They seek out complexity and honesty about the world’s challenges, and want to see and know for themselves, and I find great hope in that.

It reminds me of the disciples, who had far from easy lives, to be sure, but who also had every incentive to stay put—to keep their worlds small and familiar and predictable—but who encountered Jesus, and found their perspective stretched, and their hearts yearning to see and know for themselves what God was doing in the world, and so set out to follow him.

I don’t know that our kids will find Jesus in Washington, DC next week. But I believe he will be shaping much of what they do find. His goodness will shape their goodness, and his wisdom, their wisdom.

That promise is what church is all about.

So I decided to spring for some new freon.  Told the guy to check the oil while he was at it.

If these kids are softer than I was, God bless them.   They’re soft in all the ways that matter.  That’s a blessing for us all.

See you in church,

“Compassionate toward oneself, we reconcile all inner, and the universe - from within.”