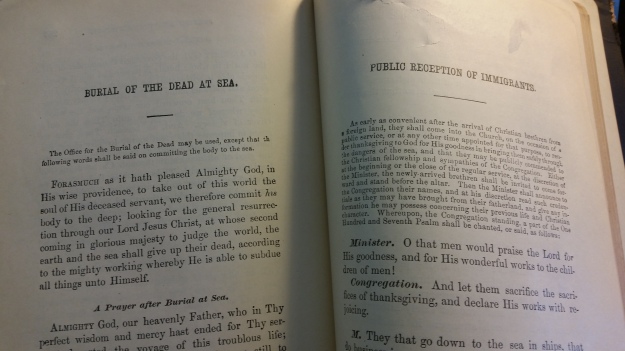 One of the gems in our church library is a 1901 Order of Worship book for the Reformed Church in the United States.

I don’t know how we came to have it. It’s not particularly rare or valuable. It’s a slender black book with a pebbled leather cover and gilt-edged pages, and looks a little like a daily diary, or like the sort of curio that a pastor buys at a yard sale.

Yet so much within it is familiar. Prayer books always have sections for different services, and there is always an appendix with the Psalms. This one is no exception. But books like these are also products of their times. For example, the Episcopal Church’s now not-so-recent revision of its Book of Common Prayer includes a prayer for astronauts and a few references to “interstellar space”…that was “cutting edge” when it first appeared.

With that in mind, when you look through a prayer book from 1901, it’s a glimpse into the hopes and fears of a new century, now itself past.

For example, it is telling that there is a whole section of “Prayers and Thanksgivings for Special Occasions at Sea.” It takes a moment to remember that, well, of course, they had those back then.

In fact, it’s next to that section, just between “Burial of the Dead at Sea” and “Laying of a Cornerstone for a New Church” that you will find a service for “Public Reception of Immigrants.”

The fine print at the top explains: “As early as convenient after the arrival of Christian brethren from a foreign land, they shall come into the Church, on the occasion of a public service, or at any other time appointed for that purpose, to render thanksgiving to God for His goodness in bringing them safely through the dangers of the sea, and that they may be publicly commended to the Christian fellowship and sympathies of the congregation…The Minister shall announce to the Congregation their names, and at his discretion read such credentials as they may have brought from their fatherland, and give any information he may possess concerning their previous life and Christian character.”

It’s telling that before offering the “fellowship and sympathies of the congregation,” and even before the announcement of their names and “such credentials as they may have brought,” it was assumed that the most urgent need of arriving brethren would be “to render thanksgiving to God for his goodness….”

I’m moved by that urgency.

In our own era, we can be so quick to introduce ourselves and so slow to remember to say thank you—to anyone, much less to God. We have lost some of that sense of having been brought “safely through the dangers of the sea” or any other place, and so often consider ourselves lucky (randomly) to have made it to a safer, better place, for however long we get to be there. We have lost the habit of seeing, and naming that sense of deeper forces and purposes at work in our lives, and don’t seem to feel as if we owe those forces much of anything.

That’s why Thanksgiving is such an important holiday.

It may not be on any Christian calendar—it’s not an “official” church holiday, of course.

But to me, it’s one of the most important holidays of all.

It’s a day we have a chance to feel that sense of God’s claim on our lives, and God’s claim on the history that brought us to this place. It’s a day when we remember that giving thanks isn’t supposed to be the last thing we do, but rather the first thing we do—just as Sunday, the Sabbath day, isn’t the last day of the week, but the first—it’s the act of devotion and the day of recollection from which all other acts and days may then begin.

Like the Sabbath, Thanksgiving is a day to remember that there is a world of difference between being “lucky” and being blessed—and that we have been blessed, and with much that God expects to follow from that blessing.

To me, this little prayer book gets it right. We have escaped the “Burial at Sea”—the sea of troubles we constantly navigate, whatever they might be. What lies ahead is the “Laying of a Cornerstone,” not only for a new church, but for a new world—a place that reflects our commitment to justice and peace, freedom and love, however we may be called to work for such a world.

Happy Thanksgiving.
See you in church,