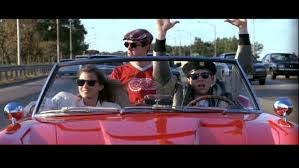 The PBS Newshour reports that today is the 30th anniversary of Ferris Bueller’s actual day off.

Something to do with if-you-closely-analyze-the-baseball-game etc. etc. etc.

The inevitable “oh no it isn’t” posts won’t be along for another five minutes, so I’m using this interval to think about Ferris and to wonder what he’s up to.

He’s closing in on the age his dad was back then. The dorky dad-boogie up in the office while Ferris gleefully twists and shouts at the center of the parade on the street below?

Heaven help us, that’s us now. Or some of us, anyway.

Not long ago, seeing the movie for the first time in ages reminded me of a conversation I had with a friend of mine back in 1985, around the same time that “Ferris Bueller’s Day Off” was released.

“I never want to have a job where I can’t wear sneakers,” he said.

It felt deep at the time. Sadly, that was often about as close as our imaginations could get to Sticking It To The Man. (If you’re from the 80s, you’ll remember that a lot of us struggled with that.)

Remembering it made me wonder where he is now, and if he’s still holding onto the sneakers thing, and if so, why.

Predictably, perhaps, the older me hopes he pushed through it.

But we didn’t have it all wrong back then, and so my deeper hope is that he’s out there, somewhere, doing something edgy and brilliant and fearless—which is how I remember him back then, and where I thought all of us, or at least many of us, were headed.  Which is what wearing sneakers at work seemed to symbolize.

If I’m honest, it’s also what I suspect I wanted Ferris to be pointing to, although, of course, he wasn’t.

Today we would be less inclined celebrate him uncritically just for being a free spirit, more likely to be troubled by his celebration of petty entitlement, and far less charmed with his sheer élan.

Too bad. We’ve forgotten that he was admittedly sneaky but never smarmy, and that his goal, if he had one, was not simply enjoying the petty entitlements of youth, but was really about working around the petty tyrannies of adulthood.

He had a point there.

Moreover, when it came to my that, I can’t help but remember that back then, there was for me the implicit message of “Ferris Bueller’s Day Off” was about the possibility that nice kids could be rebels, too.
By contrast to so much of the world around me then, the movie suggested that there were options–that being a stoner or one of those perpetually angry, oppositional adult-hating teens weren’t the only ways to say “no thanks” to the often ridiculous rules of the world, which the adults seemed to find as confining as we were all starting to, even if they seemed to feel no obligation to change those rules.

In fact, if “Ferris Bueller’s Day Off” was to be believed, most of the adult day seemed wasted on maintaining those rules, because…because….yeah.

That’s what made Ferris so great.  Because for that one day, at least, he wasn’t having any of it.

Wistfully, then, let me admit that there was something genuinely liberating about that. In its own way, the movie managed to make a point that nobody else was making, and to suggest a path nobody else was suggesting.

Back then, I really wanted and needed that path.

Thirty years later, I’ve come to know that genuine freedom turns out to be a lot harder to come by. Most of us, even the really angry ones, have settled down, and settled in, and settled for the rules, after all.

It turns out that to live by different ones is the kind of project most of us didn’t have the strength or focus to sustain.

So today, I wonder about Ferris.

Did his fundamentally good nature and decidedly PG love of shenanigans mean that after college and Sigma Chi, he settled down, went to B school, and after a few years with an apartment in the city, remortgaged his childhood home and started living the life?

God, do he and Mr. Rooney run into each other in the prepared foods aisle and…you know…chat?

Or did Ferris find a way to blaze his own trail, for real?

Was it all just about the exuberance of being young? Or did it actually hint at what it might be like to be gifted with a special kind of fire?

Please let it be the fire.