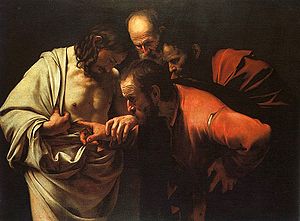 I saw a photograph this week that someone had snapped in the course of her travels—it was a huge Walgreen’s sign that read “Easter…50% Off.”

I guess that’s better than “Easter’s Over: Going Out of Business.”

But it seems hard to deny that the world seems to take Easter at a little bit of a discount.

Just compare it to Christmas.

Christmas manages to be more of a season…more of a culmination. The world goes quiet in that week after Christmas in ways that seem reverently hushed.

People have always said things like, “’Tis pity that Christmas comes but once a year.”

For whatever reason, joyous as it is, Easter is not like that.

The fact is, even for many in the clergy, there are years when it just seems to come and go, like an Easter Bunny hopping from one side of the stage to the other.

And if that’s what we’re doing…if we’re telling it like it is…maybe it makes sense that the Sunday after Easter is the day when the Church reads the story of “Doubting Thomas.”

There used to be a show on MTV that began with the words, “This is the true story of of seven strangers… picked to live in a house…work together and have their lives taped… to find out what happens… when people stop being polite… and start getting real….”

In that spirit, there is this sense that the politeness of Easter is no longer required…that now we can all be real.

It’s too bad that for many people, “being real” seems to mean “sleeping in.”

And I would argue that we need that faithful, real-world, here and now honesty as much as we need that hope-filled Easter Morning glimpse into God’s glorious future for Creation.

In fact, if it were up to me, The Sunday after Easter, Doubting Thomas Sunday, would be as much a part of the story as Palm Sunday and Holy Week.

Because it’s more important than many of us ever give it credit for.

Because without it, so many of those who need Easter the most can miss the Easter message entirely.

Because, remember, church….remember: so many people join us for Easter Sunday and they think that actually, we have forgotten…that we who are inside have forgotten what it feels like to be on the outside of the church and looking in.

They think we have forgotten what it is to live, not quite sure about what you believe.

And not quite sure how to get your life together.

And not quite sure if other people can tell that, some days, you’re hanging on by your fingernails, just hoping to get through.

Those pilgrims come, and they think we’ve gotten it mostly figured out. That each day is Easter Sunday, and that we’re all just here to say thanks be to God.

They think we’ve probably forgotten life on the outside looking in.

If that’s your situation, and you come to a church on Easter, it can be so easy to leave that Easter service, convinced that everyone else in the sanctuary was born singing the “Hallelujah Chorus,” and that you’d better keep your own searching reeeal quiet, because the only people who ought to be calling themselves Christian are the ones who have already found Jesus, and not the ones who are looking for him.

The story itself is not long to tell.

On the evening of the first Easter, the disciples have retreated back to their hiding place—that room where they had been holed up for days, waiting for Passover to end and for the Romans to march back out of town, leaving the coast clear.

And the story goes that Jesus comes to them there, ghost enough to pass through a locked door, but human enough to touch, and wounded enough to prove that he is the one and only Jesus.

He is among them again. It is truly him. In spirit and in flesh. Somehow—who knows how?—only God knows how—but there he is.

The story does not tell us what they said to one another after he left again. It doesn’t tell us how they wrapped their heads around it.

Instead, it tells us only that one of their number, Thomas, was not there when it happened.

And when Thomas arrives, he is unprepared to accept their testimony about this new, strange appearance of Jesus among his friends, and he says, “Unless I see in his hands the print of his nails, and place my finger in the mark of the nails, and place my hand in his side, I will not believe” (v.25).

“I can’t know Jesus like this second-hand,” he says. “I’d love to believe it. But I need to see it for myself. I need to know it in my own way. Prove it.”

I love him for that.

I love him for listening to his own heart and his own head, and for trusting the prompting of his own soul to tell him when he had found what he was searching for.

Some would say that’s disrespectful, or even faithless, but I don’t think so.

In my book, he’s one of the strongest disciples that the Church has ever known—the conscience of them all.

He won’t go along to get along; he doesn’t know how to win friends and influence people; he won’t let some other piper call the tune.

And so he pushes back.

To me, that makes Thomas the patron saint of all seekers.

To me, he is a friend to all those who find easy answers to deep questions unacceptable.

He will only stand up for what he knows.

I love him for that. And so does Jesus.

Clearly, there is a place for him among the disciples, and in the Kingdom of God.

The Church throughout its history has told people of all kinds – people of all backgrounds and classes and races and genders that there is a place for them in God’s heart, and in God’s church.

God doesn’t expect us to have all the answers, or to imagine that we’ve finished our growth into who it is He needs us to become.

I believe God wants us to seek, and to keep on seeking all our days.

We cannot expect all the answers to line up before us—part of this journey that we’re on means that seeking knowledge, and seeking to serve God always pushes toward the horizon, taking us further into the unknown.

But our world is forever growing. And our hearts are forever expanding.

And in time, with God’s help, we come to understand that we must push beyond the world we know, and beyond the facts we can hold in our hands, and journey on into the places where only faith and trust can direct us.

Today’s Scripture reminds us that without doubt, there is no seeking. And seeking is precious to God.

Without seeking, Easter is a story that simply comes and goes.

It was for Thomas.

May it be so for you and for me.

SHINE OF A LUCID BEING