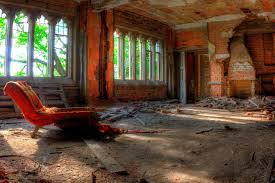 In January 1980, my parents bought a sweet, but unprepossessing little house in Brooklyn—the former carriage house of a church that was itself limping along at the end of our block.

On the day we moved in, the ground floor of the house was a three-car garage.

When my father pleasantly told one of our new neighbors that we had big plans for the house, and that we were going to fix it up, and convert the garage into our living room, the neighbor started arguing.

It turned out he had one of the three parking spots, and wanted to convince us that the place was better off being left exactly as it was.

That turned out to be a minority view.

Over the next year or so, my parents began talking with architects and others about their plans for a major renovation. And time after time, the architect would arrive and try to talk them into changing everything—into tearing the house down and starting over.

The most memorable to me was the one who arrived, flashed a big dramatic smile, looked at my mother and said, “The moment I saw you folks, I could tell you were land people.”

I’m still not sure what that means.

But I can tell you that, to him, it mostly meant a new three-story house on the front of the lot, with our little carriage house becoming a mother-in-law apartment and laundry room at the back.

Eventually, of course, the plans came together and what emerged was a wonderful place—thanks almost entirely to my mother, who could see potential that nobody else could see.

But it was an education for all of us.

And it’s no exaggeration to say that at almost every step of the way, the idea of renovating an old house—of repairing what was broken and giving it new life—seemed downright crazy to many.

It was then I learned that repairing what is broken can be a radical act, indeed.

Throwing it away—tearing something down and starting over simply because, well, why on earth wouldn’t you just do that?—makes a lot more sense to a lot more people.

This past summer, as Tony Izzi was putting the finishing touches on a car he had been lovingly restoring for several months, Grace asked me if his car was broken.

“Not really,” I explained. “He is fixing his car for fun.”

“Why doesn’t he want a new car?” was her response.

…How early it starts….

Time will tell, I guess, if Grace comes to understand this particular kind of fun.

As I said, repairing what is broken can be a radical act, indeed.

This morning’s Scripture from Isaiah is also, at its heart, a promise about rebuilding.

“They shall build up the ancient ruins,” he says, “they shall raise up the former devastations; they shall repair the ruined cities, the devastations of many generations” (Isaiah 61:4).

And what he’s talking about is the rebuilding of Jerusalem.

He is imagining the day when God’s people, exiled in Babylon when these words were written, will be freed to return home—freed to get about the work of rebuilding their lives—rebuilding their civilization—rebuilding the walls of their city, and of the Temple, which had become the center of their faith.

What Isaiah is imagining is a new start, of course, but not a tear down. It’s an act of renewal, a renovation—a faithful process of bringing new life to old stones.

We tell it at Christmas because of its opening lines, which read, “The spirit of the Lord God is upon me, because the Lord has anointed me; he has sent me to bring good news to the oppressed, to bind up the brokenhearted, to proclaim liberty to the captives, and release to the prisoners; to proclaim the year of the Lord’s favor…” (61:1-2).

It is a reasonable job description for Jesus, of course.

In fact, Luke’s Gospel even tells us that it is these very words that Jesus reads in his home synagogue at Nazareth, before he shocks them all by adding: “Today this Scripture has been fulfilled in your hearing” (Luke 4).

They don’t like that the carpenter’s son, who was a nice enough kid but always a little out there, is suddenly looking at the old, old promises of Israel’s prophets and acting like he’s looking in the mirror.

They don’t like to have the ancient promise of the messiah mocked in this way, which is, for sure, how it sounds to them, because Jesus the carpenter’s son isn’t anyone’s idea of a messiah – except maybe for his mother’s, and there were plenty of rumors about her in her own right, and about that convenient little out of town trip down to Bethlehem all those years ago….

The people of Bethlehem, the hometown crowd, doesn’t like hearing these words from Isaiah quoted back at them—not by him—not by Jesus—not when he says that today these words have been fulfilled in their hearing because, Lord, look around: how could that be?

The messiah they were hoping for was a lot more like your typical leading man.

To hear Jesus claiming the mantle? That was like sending in Ryan Gosling to star in a John Wayne movie, and…just…come on….

And that’s true because, on some level, they are seeing what’s ahead, what’s on the horizon, as a massive tear-down.

That a great general, a military commander will come from among them, somewhere, and yes, maybe he would be as improbable as King David himself had been at first, or even Moses…but wherever it was he would come from, he would be tough as nails and destined to win.

And that’s what they were looking for.

Because that tearing down was going to be glorious. Truth be known, they could hardly wait for the messiah to show up with his wrecking ball.

Maybe the real issue is that what Jesus says, and what Isaiah says, is that the real work is the work of rebuilding. The work of repairing.

Much as we dream of starting fresh, starting over—of sweeping aside what’s broken and moving on—the fact is, we can’t.

And we can’t because most of what’s really broken in our world is in ourselves.

By way of analogy: a story caught my eye this week about how Atlantic City is falling on hard times, again, with many of its casinos already closing or soon to close.

It has gotten so bad, in fact, that not only has Donald Trump pulled up stakes from Atlantic City. He sold his casinos there about two years ago, before things got bad.

But now, he is apparently suing the people who bought his casinos so that he can have his name removed from the buildings entirely so that his name won’t be associated with their seemingly inevitable bankruptcy.

Now, in fairness, most of us don’t have to think of ourselves as a brand the way Donald Trump does.

And yet, on some level, it comes across as if he’s trying to wipe his fingerprints off of the city and simply sneak away.

Whether it’s a bad investment, or a bad marriage, a bad career choice or a bad attitude, in general, who wouldn’t want to sneak away?

And yet, however much we might like to, we can’t just throw away our own brokenness—and though it is hard to admit, so much of what’s broken in our lives comes from within us, and not from outside us.

The real bankruptcy is us.

As a result, even when we succeed in sneaking away, so often we find that, wherever it is that we gravitate to next, the same old problems return.

Because the real problem is that we have not changed.

Christmas is a way to acknowledge the coming of a new and better world.

A new and better you and me.

But today, we are called to remember that the real work—the real message of Christmas—is not pointing to a work of destruction, but rather, toward a labor of love…toward a patient rebuilding….toward a dedicated repairing of all that is broken in the world…beginning with all that is broken within us.

The Messiah comes, not as a general who will sweep away all oppression, but as the Holy Child, whose vulnerability will teach us to see the vulnerability in all of us, ourselves included, and teach us to become, not warriors, but peacemakers.

The Messiah comes as one who will destroy all that is false in the world, and in our lives, not with the might of his hand, but with the depth of his truth and the wonder of his love.

He comes not to tear things down, but to lift us up, because he sees potential in us that maybe nobody else has ever quite managed to see.