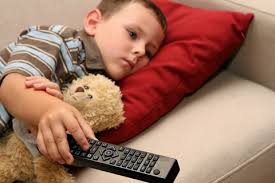 Do you remember the first week after school let out for summer?
For me, it was always a strange, “between” kind of time — the day camps with which I began each summer had not yet started, but going on the subway by myself was strictly forbidden; calling people on the telephone “just to talk” was not something we did until eighth grade.
So mostly, I watched t.v., except for the three hour window in the middle of the day between “The Price Is Right” and “Divorce Court,” during which I usually wandered up to the Burger King on Montague Street for lunch.
That was about it.
Generally speaking, my parents had a pathological distaste for seeing me sit around.
A lazy morning on the sofa, watching t.v. was something they referred to as “glomulating.”
In fact, they were so opposed to glomulating that I took a certain amount of pleasure in actually getting away with it for a few days.
They were at work.  They had a full summer schedule for me kicking in the following Monday.  City living didn’t allow for hopping on your bike to go fishing with Alfalfa and Spanky down by the creek, or whatever it was that other kids did in other places.
These were just the facts.  Glomulating it was.
Now that I’m a parent, it seems as if glomulating has triumphed in ways we never dreamed possible.
Phones and computers and televisions have started fighting for any and every moment of our attention — with kids the most eager consumers.
In the best case, they’re communicating, even building their own communities with new, powerful tools, finding ways to journey together through their days, no matter what kind of geographical distance might separate them.
Or are they just glomulating?
Because I have tremendous concerns about that.
It also makes me glad that here at 2CC, next week we’ll be hosting Vacation Bible School — starting the summer off for our kids with a very different kind of morning, and a very different kind of message, than was ever possible for me in the strange “between” time I always had in elementary and middle school.
VBS is an important opportunity for us to talk with kids about things that matter, and to make the Bible stories at the heart of our faith come alive for them, whether for the very first time, or in an exciting new way.
It’s a way to show them that, while others may be holed up somewhere glomulating, they are called to be out in the world, practicing compassion and kindness, making community, and finding a tune to dance to.
Maybe it’s a way to remind ourselves that we are all bound by that same call — that there is no “between” time for the work of building the Kingdom of God.
If you can, I hope you’ll stop by church some morning next week to take a look. You’ll be inspired.
Please pray for the camp’s success in showing our youngest how precious they are in God’s eyes and in ours.
See you in church,